Don’t Underestimate the 5G Impact on Just About Everything 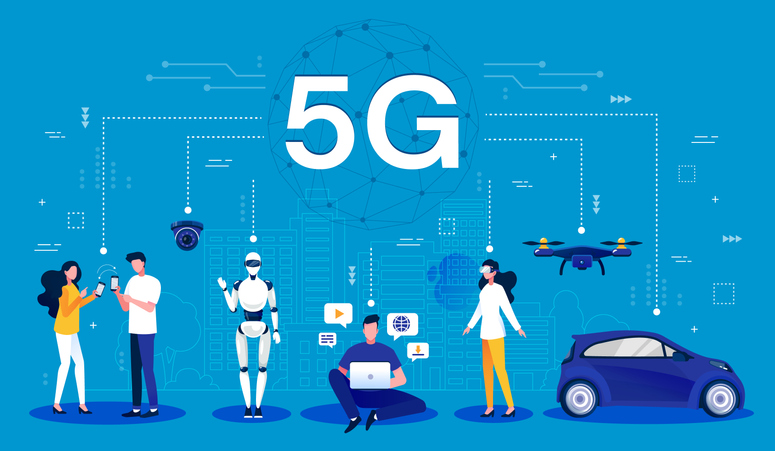 5G (5th Generation Mobile) is far more than the next step in wireless speeds for your phone. This technology will fundamentally change the world and how we interact with it today. It will bring advancements in many sectors from agriculture to medicine to technology. However, there are also many concern rs about it.

How We Got Here

Let’s rewind the clock a little and take a look at how far we’ve come in a very short amount of time. It all started with 1G in the ’80s. The first generation of networks provided speeds maxed out at 2.4kbps and you could only make calls back then. In 1991 we moved to 2G. This new generation allowed for calling, texting, and picture messaging. Speeds capped at 50kbps.

Quickly we moved to 3G in 1998. This allowed for video calling and more data transmission. It was the real start of the “mobile internet” as you could get up to 2mbps. In the late 2000s, there was 4G with speeds usually ranging from 10mbps to 100mbps; think of high-def videos, Youtube, FaceTime, and web browsing.

Relative to 4G, 5G networks will have greatly reduced latency and wider bandwidth. This means faster download/upload speeds, and more and more devices connected. Qualcomm, a leading wireless chip maker, has stated that download speeds can be up to 20x faster than 4G. That means you’d be able to load a 4K video in seconds, even though the implications of 5G are far greater than loading speeds on your phone.

The IoT is the network of items that are currently connected to the internet. These items span many markets and each day, more and more items join this list. Smart toasters to smart TVs to children’s toys to home security systems to many many, more.

5G will allow us to connect more items to the IoT and enhance our world in many ways we have yet to even imagine.

One advancement around the corner is having all cars connected to the grid. So far we’ve only seen the potential of self-driving cars in a very limited way, but 5G will actually allow these cars to talk with each other. This allows them to negotiate taking turns at stop signs, merging lanes, and detecting poor conditions ahead.

Further, 5G will provide connectivity throughout homes with safety features to help the disabled. Cochlear implants will provide immediate feedback to the user's surroundings. Sensors inside the home will detect any accidents and alert the authorities immediately.

With more items coming online, a new, innovative space opens for small businesses. The opportunity for small businesses to make money in e-commerce has never been quite so lucrative. Statista estimates that “e-retail revenues will reach 6.54 trillion US Dollars by the end of 2022”. Many of these items will be innovations that are possible only from the interconnectivity that 5G delivers.

Interestingly, 5G will supposedly revolutionize our health care system in many ways as well. Take an MRI machine for instance. The image files produced are massive, sometimes up to 1 gigabyte. Sending these files on existing networks creates a huge strain on the infrastructure. This drives patient wait times up and leads to doctors seeing fewer patients.

Telemedicine will become even more prevalent and it’s expected to grow 16.5% from 2017 to 2023, which means we need to have a network to support it. This growing medium will allow more patients to see a doctor than ever before.
AI uses a vast amount of data to help make predictions about certain patients' risks and diagnoses. The bottleneck for how quickly it can do this is the speed of the network. 5G will help AI learn faster and ultimately save more lives.

The impact of one of the newest technological innovations of our time will even affect one of the oldest: farming.

Farmers will be able to use 5G smart collars for their livestock and track their health in real-time. With this data, they can track how much their cattle are eating, sleeping, and if there are any potential health issues. This will lead to incredible efficiencies and even reduce the risk of bacterial infections spreading.

In our booming world, automation is essential. Data suggests that we will need to produce 70% more food in 2050 than we did in 2009. 5G will aid in this automation. From autonomous tractors to drones that monitor the health of crops. Every aspect of farming will improve due to the advancements brought on by 5G.

Coronavirus and Other Potentital Issues with 5G

With the obvious improvements of 5G, it’s hard to believe it would have any detractors. It’s human nature after all to have this “us vs. them” mentality. When something goes wrong, we want someone to blame. When COVID-19 exploded onto the scene, people didn’t know what was happening or how it started, and fear reigned over logic and reasoning.

On January 20th, fringe conspiracy theorists posited that the virus was linked to 5G. They cited that the outbreak began in Wuhan shortly after 5G towers were erected. There is no evidence linking 5G to COVID19 and every credible source knows this is a baseless claim built on fear.

Bad ideas can, unfortunately, spread rather quickly. By April, conspiracy theorists in Europe had begun setting cell towers on fire. Unfortunately, this could affect the rollout of life-saving technical knowledge, despite the gigantic steps ahead 5G technology has taken in the past ten years.

There may be baseless claims from crackpot conspiracy theorists, but there are legitimate worries about 5G. With the rise of the IoT, the need for increased security becomes paramount. Many devices don’t have the same security protocols that your phone or laptop may have, making them easy targets for hackers.

You may think that it’s not such a big deal if someone hacks your smart TV. Well, you need to think again. When your smart TV is a trusted device on your computer it becomes a target. Hackers will utilize the speed of the 5G network to steal your information a lot more efficiently, and this is a good reason for you to be concerned.

As we grow our 5G network and the list of items that connect to it, we must be diligent with the security measures we build around them.

One country that has been successful and expedient with their rollout of 5G is China. Back in 2016, an artificial intelligence system called AlphaGo stunned the world. It managed to defeat a world champion Go player in Seoul, South Korea. Go is an ancient game created 2,500 years ago and is far more complex than chess.

The Chinese government took this as no trivial matter. They saw that the Americans had developed this AI and shortly after that, they announced their intentions to become the world leader in AI by the year 2030.

Many fear that we are entering a new Tech Cold War and that it’s a winner-take-all game.

Where we go from here is anyone’s guess but what is certain is that 5G and AI will play a large role. 5G has the power to liberate us in many ways but, like any great tool, it can be used destructively. One thing that’s for sure, technology doesn’t slow down. Making sure we progress in a safe, controlled way is paramount. Furthermore, it would behoove us all to preserve international relations, rather than tear them down.