Securing Internet Connection: All about the SSL Port or Secured Ports 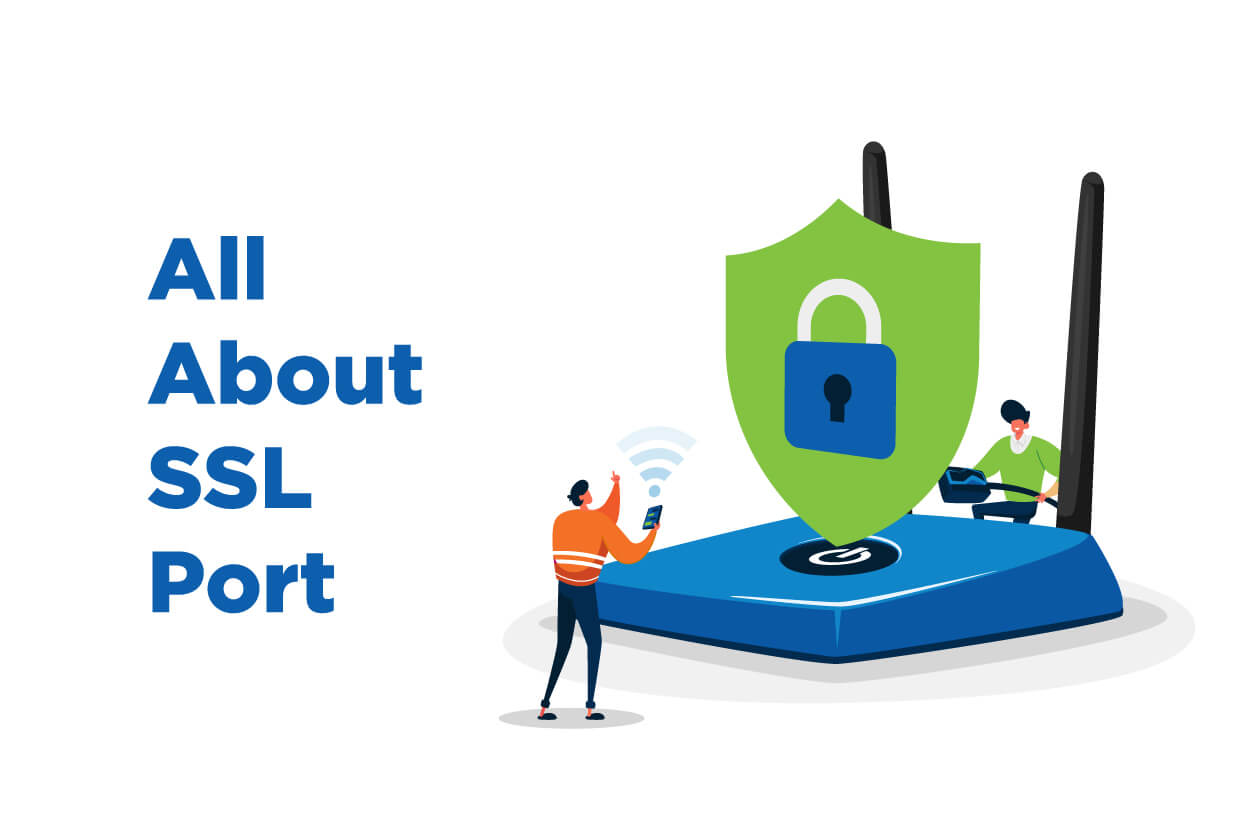 What is an SSL Port or Secured Port?

People and organizations exchange data digitally, be it public or sensitive information. This major feature of the internet increases the need for data security on the internet. An SSL Port, also known as Secured Port, utilizes Secure Sockets Layer (SSL) certificates to protect internet connections.

SSL technology’s main purpose is to keep internet connections secure through encryption and data authentication. In websites we access, our device forms a connection with the server. The SSL ensures that information transmitted over the internet remains private and protected by encrypting the data transferred between the server and the client, and the SSL port indicates whether the connection is secure or not.

There are various ports on the internet that are used for specific purposes. Web locations are isolated into four or seven layers, and the vehicle layers are where porting occurs. Ports are one way to indicate secure connections. All in all, there are 65,535 ports. It is useful for professionals to know port numbers of common functions, as summarized in the table below.

HTTPS uses port 443 to establish a secure connection. To be able to do so, you will need an SSL/TLS certificate.

As previously mentioned, different ports serve different functions. Port 443 is the SSL function for HTTPS, used to transmit web pages securely through encryption techniques. Information that travels through port 443 is encrypted using SSL/TLS technology. This means that the connection is secure, and information is kept safe while in transit.

The SSL connection port determines whether the connection is secure or not. While all unencrypted HTTP web traffic is handled by Port 80, Port 443 is used as an endpoint for transfer layer protocols like UDP and TCP.

Transmission Control Protocol (TCP) and User Datagram Protocol (UDP) are communication protocols that can be used to transmit data across networks. Before defining these two protocols, let us first discuss what an internet protocol (IP) is.

IP is a network protocol and is a set of rules that dictate how data is transmitted from the sender to an intended recipient via a network. It is one of the seven layers of the open systems interconnection (OSI) model that guides how data is exchanged between systems. The seven layers are namely:

The TCP is a connection-oriented data communication method. This is part of the transport layer of the OSI model with the purpose of being an error-free method of transmission by ensuring that each recipient receives all data that has been sent and are received in their intended order. It follows a three-way handshake process – starting with the exchange of the flags SYN (synchronize), SYN-ACK (synchronize-acknowledgement), and ACK (acknowledgement). The flags are exchanged between entities, ensuring that a reliable and safe connection has been made.

On the other hand, UDP is a connectionless communication protocol. No connection is required to be established before sending data packets. Thus, no three-way handshake happens in the facilitation of data transmission. Therefore, data may not arrive complete or in the intended order but is expected to arrive faster than TCP.

Which is better, TCP or UDP?

Both TCP and UDP are useful in the facilitation of data exchange. However, there are pros and cons attached to each communication protocol and a more appropriate application scenario for each.

When it comes to data integrity and completeness, TCP is better than UDP. This is because TCP guarantees data delivery to the recipient, and that the data order is from sender to receiver is kept reliable. On the other hand, UDP may result in data losses due to its speed prioritization. TCP establishes reliable connections before data transmission and ensures that the intended recipient gets the full data, while UDP will send data regardless of whether there is a confirmation from the recipient or not.

However, the advantage of UDP comes in the speed of transmission. UDP ensures that the exchange is facilitated quickly, while TCP focuses on doing the transmission is done well, step by step through the three-way handshake. Thus, UDP is more advantageous in situations where data is needed in real-time, such as video games and chats. TCP, however, is more beneficial in situations where high data quality is needed but has room for lags or buffers. What is better between the two boils down to the purpose of data transmission.

Types of TCP and UDP – based on services

TCP and UDP are often used in different types of services. As previously discussed, TCP is used to ensure a high quality and error-free data transmission, while UDP is more concerned about having the data live and in real-time.

Common services that rely on TCP include:

The first internet service we usually think about when it comes to data transmission is email. Mail servers use Simple Mail Transfer Protocol (SMTP) to deliver an email from the sender to the recipient. Given that it is common to send emails containing sensitive information, it is very important to know the port for secure transfers.

In today’s standards, the SSL port used for SMTP is Port 587. This is considered the default mail submission port. Historically, Port 25 was used, but various local ISPs have been blocking Port 25 due to spam.

IMAP, or Internet Message Access Protocol, is an incoming email protocol mainly used for standard email retrieval. The IMAP stores messages and allows a client to access messages remotely as if emails were on local devices.

The IMAP port used for SSL is Port 993. This is used to connect using IMAP securely. Port 143 is also used for TLS.

HTTPS vs SSL vs TLS

All created with the goal of protecting data, HTTPS, SSL, and TLS are all related to cybersecurity techniques used to secure information against man-in-the-middle attacks while in transit.

SSL is an encryption-based secure protocol developed for protecting information on the internet. This is developed to ensure data integrity and privacy for data that have been in transit. This was initially developed in 1995, with another version released in 2015.

Meanwhile, TLS, or Transport Layer Security, is the successor of SSL. The TLS is a cryptographic protocol that is also designed to provide security. This is seen as an improved version of the SSL using more advanced encryption techniques.

Both SSL and TLS can be used to secure networks. These are both encryption protocols on top of HTTP.

The importance of data integrity and privacy have been highlighted in today’s remote environment. To facilitate secure connections, an SSL certificate should be used. SSL certificates are digital certificates used to authenticate the identity of a website and enable an encrypted connection. This is relevant for organizations – SSL certificates can be used not only to protect the organization but also their customers by preventing man-in-the-middle attacks. Customer information such as personal data and financial details can be kept safe and private using SSL certificates.

SSL certificates ensure that data is encrypted and is impossible to read by other parties, except for the intended recipient. In the process, an SSL handshake is formed, making the connection secure.

While there are many SSL vendors in the market, GlobalSign is one of the most trusted providers. GlobalSign issues SSL certificates at different validation levels, catering to the needs of every organization.

Our SSL certificates ensure your website is protected and meets the demands of today's modern sites.

Let us help you secure your internet connections. Message us for more information.